By marchah November 13, 2018 Uncategorized
No Comments

Starbuck, a 7 year old Siberian cat, was initially brought in to see Dr. Singleton because her family was concerned about a growth on her tail that had continued to grow and was becoming an issue for Starbuck.  In addition to the growth, Starbuck had some dental tartar buildup and some teeth that were also causing her some trouble.  Dr. Singleton and her owners decided that it was in Starbuck’s best interest to have the growth removed and a dental procedure all at once, reducing the number of times she would need to go under anesthesia and resolving all her medical issues at once.

The large growth had actually grown so much in size that it had turned into a painful wound that was about 6 cm in diameter in the middle of her tail. Dr. Singleton and Starbuck’s family decided that it was in her best interest to remove the growth by amputating her tail so that there would be no risk of the growth returning to cause further problems.

After her procedure, Starbuck returned to have her tail bandage changed and the surgical site checked, and it is healing beautifully.  Starbuck has also been a great patient for everything, she has been happy and cooperative patient despite having a couple recheck exams to make sure that her healing process is going according to plan.

Starbuck was able to resume her normal activity level after her procedures and has been doing great!

Seen below, Starbuck recovered very nicely from her procedure and was comforted by Joary, the technician who assisted Dr. Singleton with the procedure. 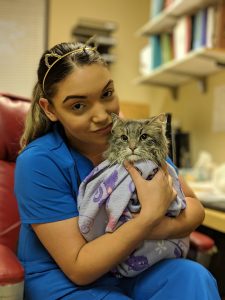